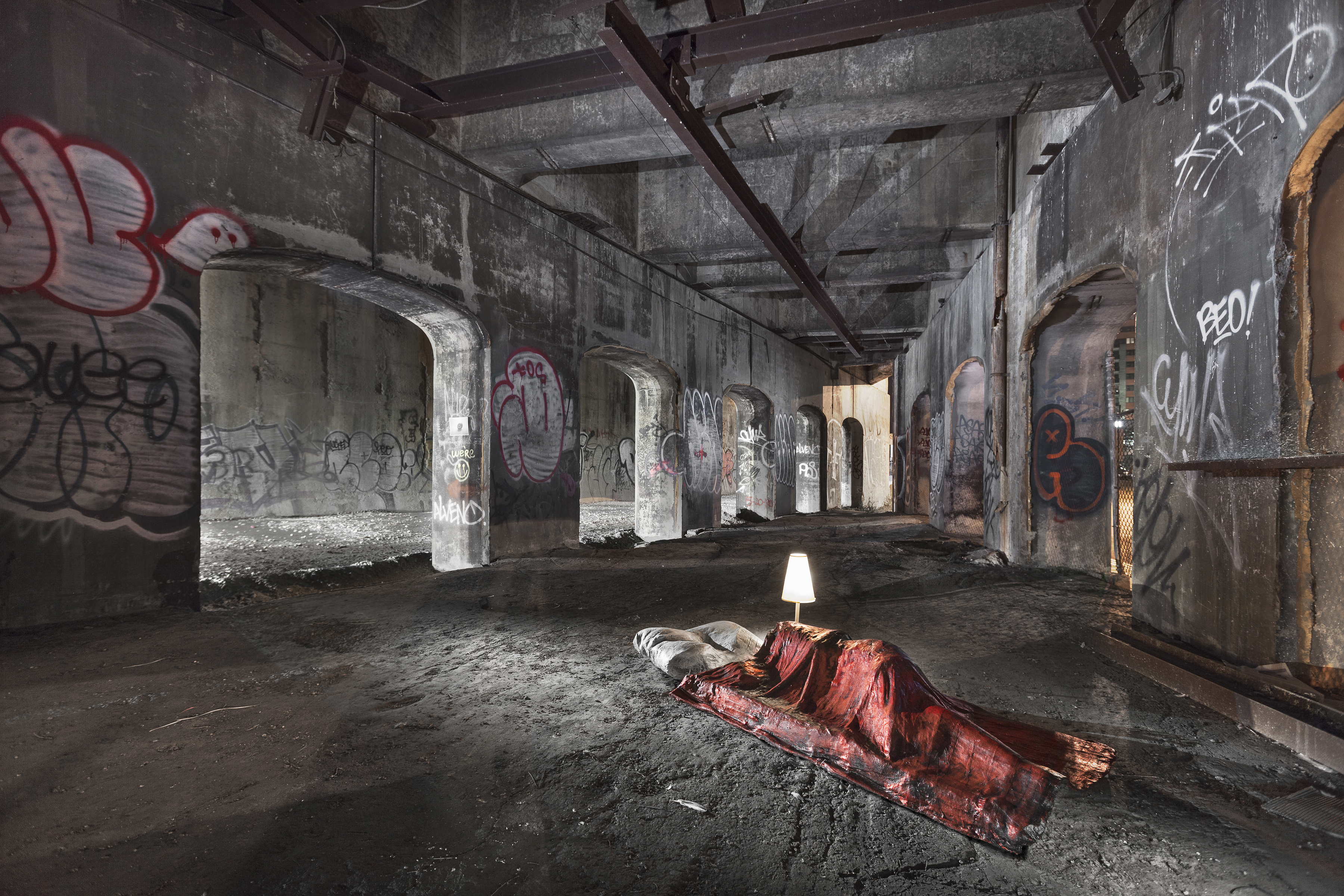 The series will look at poverty in Montreal and Quebec. In the first article, Alison Smith asked why the level of chronic homelessness in the four largest cities in Canada (Vancouver, Calgary, Toronto and Montreal) is so similar. Today, the article looks at the social assistance system in Quebec, compared with the three largest provinces in Canada.

Depending on what social policy you are looking at, the province of Québec either looks very similar to other Canadian provinces, or looks remarkably different. The social assistance system in Québec – including benefit levels, eligibility requirements, and the evolution of the system over time – is very similar to other Canadian provinces. Québec is among the most generous provinces when it comes to social assistance offered to single people and families, but the Atlantic provinces are in fact more generous (see pages 43-44 Tweddle, Battle and Torjman 2015). Provincial actions on poverty, however, both in terms of substance and in the way in which they were developed and enacted, make the province stand out from the rest of the Canadian provinces. This second article looks at the social assistance system in Quebec as it compares to the three other large provinces; the third and final article will look more specifically at actions to reduce poverty.

Social assistance is one of the most important policies in terms of lifting people out of poverty (or for trapping them in poverty, as may well be the case).

Like many social policies, including health, education and housing, social assistance is the responsibility of provincial governments. (Pensions and employment insurance are two social policies that are the federal government’s responsibility, as outlined in the Canadian Constitution.) This means we might expect to see differences from one province to another; provinces have, of course, different histories and politics, and these differences can at times be seen in the different social policies that are adopted.

The accepted measure of poverty in Québec, and increasingly throughout Canada, is the Market Basket Measure (MBM).

The MBM measures the cost of a certain “basket” of goods, including food, clothing, shelter, and transportation, that a person needs in order to meet his or her basic needs (Centre d’étude sur la pauvreté et l’exclusion 2009). By considering shelter and other localized costs, the MBM allows for a more accurate comparison of poverty levels across provinces. The cost of living in lower in Montréal than it is in Vancouver, for example, and the MBM takes this into consideration when determining how many people live in poverty in those two cities.

Québec is also similar to other provinces in that it distinguishes between social assistance recipients (see Alain Noël‘s chapter in Welfare Reform in Canada). There are different categories of assistance offered to people based on their ability to work; people who are unable to work due to a disability or a severe barrier receive more generous benefits. The most generous social assistance program in Canada is offered in Alberta to people who are severely disabled. People receiving this category of social assistance receive 97.1% of the MBM (in 2014); this is the only category in the country for which the level of assistance offered is nearly equal to the MBM. (In 2013, people receiving AISH benefits received 102% of the MBM.)

As has been the case in the other Canadian provinces, single employable people (the majority of the homeless population) in Québec have seen a stable decline in their assistance benefit rates ever since 1993.

There have been small bumps in assistance rates in certain years, such as in 1999 and 2004, but overall there is a steady downward trend in assistance rates beginning in the mid-1990s, reaching a low of $7,636 for a single person in Québec per year in 2008 (Tweddle et al., 2013). Families with children, both single and two parent families also saw a decline in assistance rates beginning in 1993, but their assistance levels began to increase in 2003/04. This increase coincided with the introduction of Québec’s plan to reduce poverty, Concilier liberté et justice sociale : un défi pour l’avenir, which, as the third blog in this series highlights, prioritized lifting families and children out of poverty.

As was the case in most provinces, assistance for people with a disability is both more generous and more stable throughout this period than it was for single people, averaging around $11,500 per year.

The income support offered to a single employable person in Québec is approximately 49% of the MBM. Surprisingly, this is high compared to what is offered for single people in other large provinces in Canada; in BC, Alberta and Ontario, single employable people receive less than 42% of the MBM. Even though benefits are more generous for people with disabilities than they are for people who are able to work, the benefit level for people with a disability are, in all provinces except Alberta, well below the poverty line. People with disabilities in Québec receive 70.6% of the MBM. Families with children fair a little better; a couple with two children receives 72.6% and a single parent with one child receives 79.1% of the MBM.

With the exception of Alberta’s AISH program for people with disabilities, which offers nearly 100% of the MBM, support offered to single parents with one child in Québec is the highest type of assistance offered in the country, at 79.1% (all numbers taken from Tweddle et al., 2014).

The majority of these benefits declined since 2013; for example, a single parent with one child received 80.5% of the MBM in 2013, but only received 79.1% in 2014. This is perhaps because assistance rates are not always indexed, meaning they do not keep up with the cost of inflation. When they are not indexed, social assistance benefits become less valuable over time.

Table 1: Social Assistance Benefit Levels in 2014 as a percentage of the MBM (BC, Alberta, Ontario, Québec) 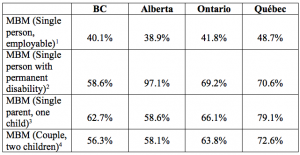 Québec’s social assistance benefit levels are more generous than they are in other big provinces in Canada, notably Alberta, BC, and Ontario. However, Québec is by no means the most generous province in the federation when all ten are considered; the Atlantic provinces offer more generous social assistance support. The assistance levels offered to all recipient groups (families, single people) are well below the poverty line as defined by the MBM in Québec. The least generous category is for single people, who make up the majority of chronically homeless people.

Though Québec’s social safety net is in many ways more generous and universal than the other provinces, a single person on social assistance does not even have half the support needed to meet his or her basic needs. With such low levels of poverty, it is no wonder people find themselves trapped in poverty.

The third article in the series considers efforts to reduce poverty in Quebec.